This week was Wish Week at Park City High School. Each year, the school teams up with the Make-A-Wish Foundation, which grants wishes to children with critical illnesses. Throughout the week, Park City sponsors a child, collecting funds to grant their wish.

Park City is sponsoring Kula this year, a two-year-old with cancer who lives in Salt Lake City.  Kula’s favorite color is purple, and she loves flowers and the outdoors. She’s still getting treatment, therefore hasn’t decided on a wish yet.

“We are just taking a slightly more conservative approach with COVID and some other hardships that are present,” explained student council (STUCO) advisor and social studies teacher Jessica Lanoue.

In order to collect funds, STUCO has organized several events throughout the week. On Monday, Mod Pizza donated 20% of their profits to the cause, Hearth and Hill did the same on Tuesday.  On Wednesday, there was an Open Mic night at O’Shucks from 5 pm to 7 pm with five dollar admission.

During the second period on Thursday, STUCO hosted Miracle Minute, where they ran around the halls with a bucket for students to donate cash to the cause. There was also a trivia game that night.

STUCO has also organized spirit days throughout the week to “make people aware that something is going on at the school and also just have a little bit more unity as a group,” said Lanoue.

The themes of the days were tailored to Kula’s interests. There were purple, nature, and flower-themed spirit days this year.

In past years, STUCO would collect funding through assemblies and other in-person events, such as movie nights.  This year, they have come up with pandemic-friendly alternatives.  STUCO reached out directly to Mod Pizza and Hearth and Hill, asking if they would be willing to help support the cause.

“In non-COVID years we might also do a dance or something like that and use that money to go towards this fundraiser,” explained Lanoue.  “We had talked about doing [another activity] Friday, but it just really didn’t come to fruition.”

The only in-person event this year was the Open Mic night at O’Shucks on Thursday.  Through Mountain Town Music, STUCO found a band called Lash Larue to play at the event, as well as several students from Park City who would perform.  The event also partially served as a karaoke night.

Wish Week is one of two major STUCO fundraising events, the first being Soles for Souls, which donated shoes to those in need earlier in the year.

Wish Week was first created in 2018, by Amanda Allen a member of STUCO. 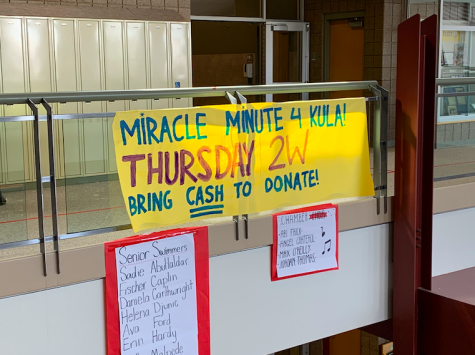 “It was a really big deal that first year,” recalled former STUCO advisor Julie Hooker.  “[STUCO] made it super fun.  We had a huge assembly, and the child came.”