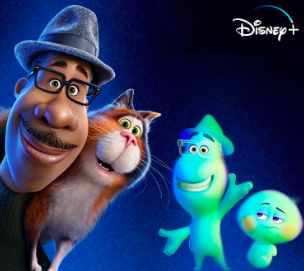 Since Toy Story came out in 1995, Pixar has been famed for its deep emotional themes, wrapped up in a fun package enjoyable by kids. It also pioneered digital animation, offering a much more engaging aesthetic than the traditional hand-drawn images.

Because of its dedication to complex stories and stunning visuals, Pixar movies haven’t become obsolete among high school students like some other popular children’s media.

The film Soul, co-directed by Pete Docter and Kemp Powers, is another installment in this tradition. It was released on the streaming platform Disney+ on December 25th.

The movie features Joe Gardiner (Jamie Fox), an enthusiastic New York musician on the verge of a big break. But through a series of misfortunes, he finds himself in The Great Before, a land where souls live before coming to Earth. His journey to return home is a complicated one, aligned with a rebellious soul called 22 (Tina Fey).

One of the most striking things about the movie is its beauty. We’ve all come accustomed to Pixar’ssignature depth and colors, but this film takes it to a different level.

The Great Before is characterized by an ethereal elegance that is both inviting and mysterious. New York itself is loud and chaotic; you can almost feel the thrum of the city. Additionally, the characters–many of whom are composed out of pure light–are stunningly beautiful.

The performances are predictably solid. Fey leans into the grating aspect of her character and Foxx manages to capture both Joe’s wonder and frustration. The counselors in The Great Before, cal

led Jerries (Alice Braga, Richard Ayoade, Wes Studi), have voices just as serene as the world in which they inhabit.

The story proposes several key questions: What makes life worth living? Do we have a purpose? Do we need one?

The movie does its best to answer these questions, and it’s successful. The coherence of the end result is slightly dubious, but the film still manages to leave you with content satisfaction.

Other aspects of the plot do stumble over themselves a few times. Many parts of the worldbuilding are vaguely confusing or a little too convenient.

But these issues are not detrimental. The film is a dreamy “what if?” and so the audience can more easily dismiss their lingering questions.

Although perhaps not as polished as other titles, Soul is yet another gem in Pixar’s amusing and introspective catalog.