A new glass divider was installed at the front entrance of Park City High School recently. Construction was planned for the duration of christmas break but was delayed due to scheduling and the overlap of installation at the elementary schools. It was a sudden change in a hectic time and many were not prepared for it.

The initial impression from students was quite negative. They don’t know what it was installed for, and their immediate thought is “active shooter”. Lance Rothchild, junior, asked “What kind of shooter is gonna go through the front door?” Lack of communication is leaving students with wandering imaginations. 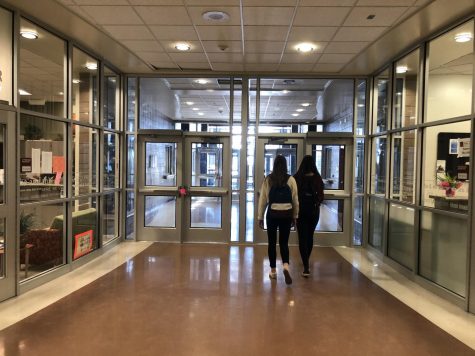 Within the past five years alone, they spike in school shootings has caused a rift in society. Some advocate for gun control, while others don’t. But in this case, potential school shootings aren’t necessarily the only reason for the glass dividers. Principle Arbabi stated, “We have an issue, especially during times like sundance, where we have people just walking around campus”. They’re intended for the protection of students and staff.

Principle Arbabi mentioned that parents who don’t have access to their children will come on campus and demand to see their kids. He said, “We’re just trying to protect everyone.”

Eventually all students and staff will be required to carry RFID cards, which will be embedded in student ID’s. There will be multiple points of entry, not just the front entrance. Though, if you are tardy then you will have to enter through the front door. The RFID readers are not purchased yet but are in the process.

Students are not pleased with the new addition and are thoroughly confused. Many are angry, and many just have no idea why it’s there. Kelton Laurence, junior, said, “I never use that door anyways so I honestly don’t [care] about it.” It can be difficult to care about something if one doesn’t understand it.

Lack of understanding can lead others to believe the worst as well. Noah Nasser, senior and student body president, said “It’s a sad image of the world we have to live in.” Park City School District is trying to protect its students from a number of possible threats. Like mentioned above it may just be for parents who don’t have access to their kids.

There are already precautions that PCHS has been taking. They have a program called raptor that scans ID and tells if that person is a sex offender, has a record, or anything that they might need to know. So this divider is not the first step in making our school a better place, but it is the most visual and alarming which may be the cause for the outrage.