The Imbalance of Class Sizes 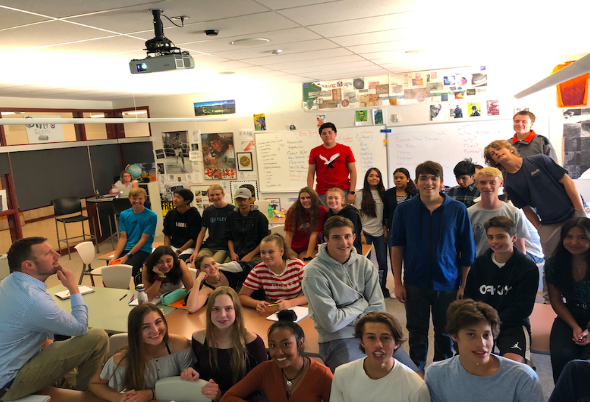 The sophomore student body has slowly but surely risen, leading to larger class sizes. Each sophomore class seems more crowded than the previous year, and this trend does not appear to be letting up any time soon.

This trend is resulting in more common occurrences of thirty or more students in every class type. The increasing class size has affected teachers, students, and administrators.

Principal Roger Arbabi explained why class sizes are so irregular this year.

Arbabi continued, “As a result, the overall average for the school for the algorithm was actually quite low, but it was only because we had certain classes that, by the nature of the course, have very few students.”

When asked if he believed the current algorithm was working, Arbabi replied, “Obviously not.”

“We have several classes that are bigger than we want them to be. There’s a combination of several things that have happened as a result of the oversizing classes,” he explained.

The class of 2020 was the most extreme change in the high school, in regards to class size.

Arbabi also revealed the formula will change in future years. He says the algorithm will balance the teacher/student ratio.

Since incoming sophomore classes are expected to grow even more, questions about change for the current class size situation has risen. For now, the only known change is the upcoming re-writing of the current algorithm, which could potentially bring more stability and evenness to individual class sizes.

For teachers, the larger classes have changed how they have taught in past years at PCHS.

According to Steve Cuttitta, an instructor for Sophomore Academy, getting personalized feedback to his students is more difficult due to large class sizes.

“It’s only been a couple weeks, but in general, larger class sizes [have] an increased workload as far as grading,” Cuttitta explains. “But, within the classroom, the more students there are, the more difficult it is to reach each of them.”

Cuttitta believes that a class size of twenty to twenty-five would be preferable to the current class sizes, which, for him, can reach up to thirty-six students within a single class.

“There is definitely an ideal number – and too small is also a problem. But yes, twenty to twenty-five, as far as knowing the students, reaching the students, allowing them to participate and giving them ample feedback…would be a desirable number,” he added.

Cuttitta is not the only teacher who sees larger class sizes as a problem.

Social Science teacher Ann Sykes said, “I would rather get paid less to teach smaller classes to get the content across easier than get paid more to teach large classes.”

Not only has class size affected teachers, but the student body as well.

“My history class is my largest class with 30+ students,” Junior Maddie Kehr stated. “Most of my classes are that large but then I have my sports medicine class with 15 or fewer students, so it really just isn’t balanced.”

But other students such as Junior Harrison Keating haven’t noticed much in regards to their learning ability in larger classes.

“For me personally, it hasn’t really affected my learning,” Keating said. “But I know a lot of kids that it has affected, and they don’t learn as well because they are distracted easily.”

Keating has noticed, however, how teaching feels more “crammed” than last year.

Although some students haven’t noticed a decrease in their learning ability, they still noticed an extreme difference from last year concerning class size and teaching style. Teachers are unable to go into depth in their teaching the way they would prefer, due to the large influx of students in their classes.

Although the sophomore classes will keep growing, there is still a possibility the new algorithm being implemented next year will manage student-to-teacher ratios better.